Mentions of robotics within the public filings of food manufacturers fell 22% between the first and second quarters of 2021.

However, the frequency of sentences related to robotics between July 2020 and June 2021 was 60% higher than in 2016 when GlobalData, from which our data for this article is taken, first began to track the key issues referred to in company filings. 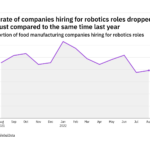 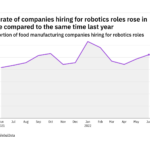 To assess whether robotics is featuring more in the summaries and strategies of food manufacturing companies, two measures were calculated. Firstly, we looked at the percentage of companies which have mentioned robotics at least once in filings during the past twelve months - this was 22% compared to 8% in 2016. Secondly, we calculated the percentage of total analysed sentences that referred to robotics.

Of the 50 biggest employers in the food manufacturing indsutry, Japan's Kewpie Corp. was the company which referred to robotics the most between July 2020 and June 2021. GlobalData identified two robotics-related sentences in Kewpie's filings – 0.09% of all sentences. French poultry company LDC mentioned robotics the second most – the issue was referred to in 0.04% of sentences in the company's filings. Other top employers with high robotics mentions included bakery giant Grupo Bimbo, Japanese meat group NH Foods and European dairy co-op Arla Foods.

This analysis provides an approximate indication of which companies are focusing on robotics and how important the issue is considered within the food manufacturing indsutry, but it also has limitations and should be interpreted carefully. For example, a company mentioning robotics more regularly is not necessarily proof that they are utilising new techniques or prioritising the issue, nor does it indicate whether the company's ventures into robotics have been successes or failures.

In the last quarter, food manufacturing companies based in Asia were most likely to mention robotics with 0.02% of sentences in company filings referring to the issue. In contrast, companies with their headquarters in Western Europe mentioned robotics in just 0.01% of sentences.