South African FMCG major Tiger Brands reported a poor set of first-half results this week amid a consolidation exercise by its new CEO, including the disposal of a number of assets. Simon Harvey looks at the key talking points.

Business sentiment continues to improve, showing a clear recovery since the onset of COVID-19. Sentiment in 2021 was up by 8% compared to 2020.   Consumer industries had the highest sequential filings sentiment growth in Q3 2021. Optimism around digital themes and general outlook drove the positive trend in overall business sentiment.   GlobalData’s Filing Analytics Annual Report 2021 on the Consumer industries provides insights into sentiment and mention trends for companies, geographies, and themes. Get real-time analysis of:

Understand the overall outlook for Consumer and spot the topics and themes that will be most impactful in the next few years.   Download the full report to understand what to expect and how to align your business for success.   By GlobalData 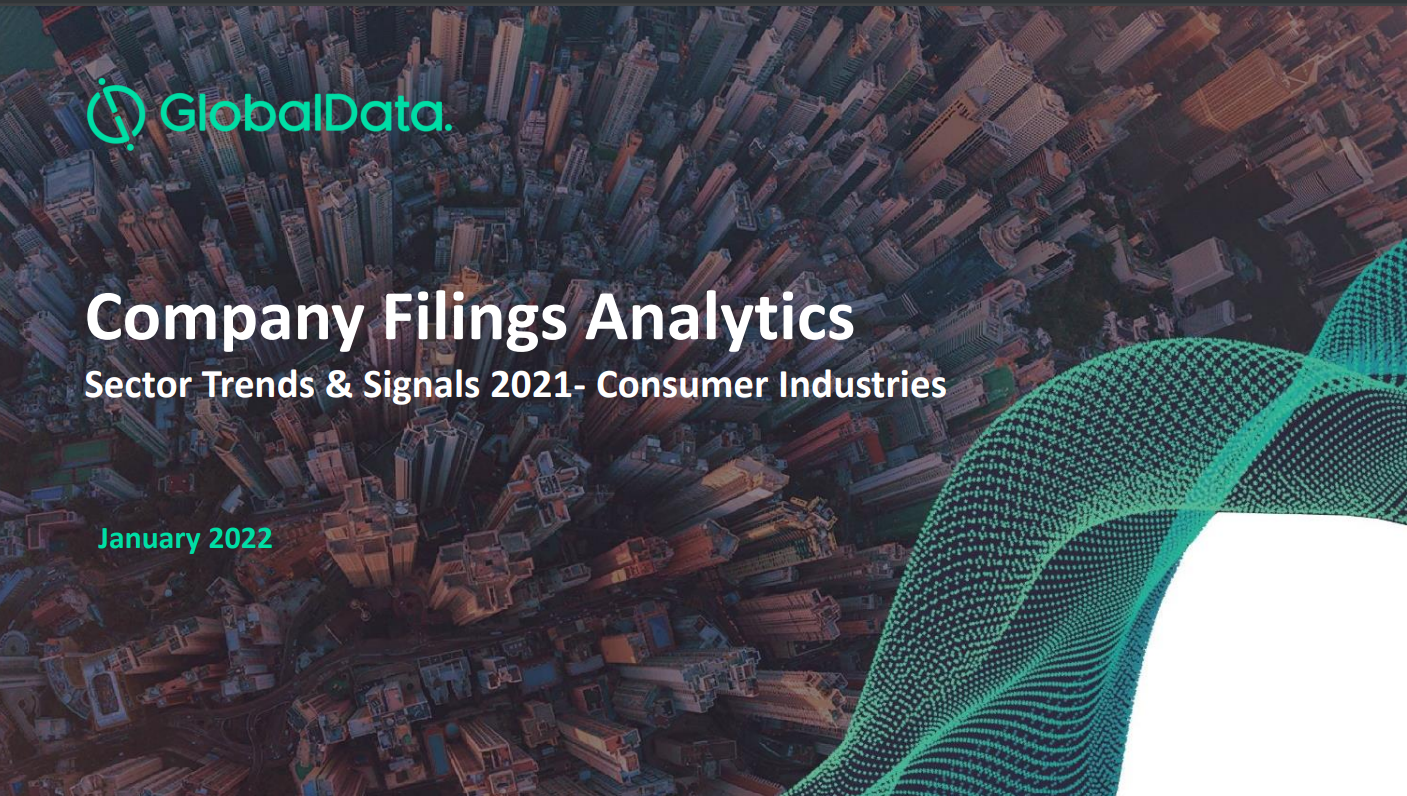 Tiger Brands plans to expand its presence in private label to bring another dimension to the South African consumer-goods giant’s business model under new chief executive Noel Doyle, who is consolidating operations with the disposal of its value-added meats business.

Doyle, who was promoted to CEO at the start of February, revealed the plans as he addressed analysts on an earnings call this week after reporting a dismal set of first-half results. While revenues edged up 2%, mainly as a result of the contribution from its up-for-sale valued-added meats business, gross margins, earnings per share and profits all fell substantially.

As Doyle spoke on the call, it was clear by his remarks that one of his main challenges is pushing through price increases amid rising raw material costs, as well as dealing with the fall-out from the coronavirus pandemic. But, as Tiger raised prices during the six months to 31 March it lost volumes and market share, with the CEO adamant further measures will be required to boost margins.

With volumes are expected to remain under pressure in the short term as a weak rand intensifies inflation pressures, and with an inevitable global recession on the horizon, if it’s not already in process, Doyle is eyeing the private-label market, which tends to benefit during a downturn.

Tiger already serves the own-label sector through its loss-making value-added meats (VAMP ) business, which includes its subsidiary Enterprise Foods . But those operations are now on the market, with negotiations ongoing with two suitors. And Tiger has also put its canned fruit business – Deciduous Fruit – under review: “[We have] started the process of trading Deciduous Fruit out of our category,” Doyle told analysts.

“Private label is going to grow”

The Albany bakery and Cresta rice brands owner had previously discounted expanding further in private label but Doyle said this week there’s been a change of focus given there are “more opportunities now”, with discussions underway with customers.

“We’ve certainly said it’s not a priority and in certain categories like the VAMP business we do significant private-label business but there is definitely a change of focus. We have to accept the reality of where we are and the fact that private label is going to grow,” Doyle told analysts.

He continued: “We have got volume-hungry facilities and private label can allow us to reduce unit costs for our branded offerings as well as put us in a competitive position relative to other players in the category.

Doyle said he would not comment on any specific categories but will hopefully be in a better position to clarify more details in the “next month or so” once Tiger has completed discussions with its retailing partners.

Tiger’s financial predicament was made clearer given the VAMP business was largely responsible for the 2% rise in first-half revenue, albeit it’s still a loss-making operation.

Volumes dropped 2%, which was partially offset by a 4% increase in prices. But the consolidated gross profit margin fell 320 basis points to 29.4% as a result of lower volumes, “as well as raw material and conversion costs rising ahead of inflation”.

The 2% group volume decline was evident in all of Tiger’s operations. Consumer brands saw a 3% drop in volumes, while exports and its international business volumes fell 8%.

Doyle said Tiger was already facing challenges on price before the Covid-19 outbreak due to its “inability to get a fair share of volume at the pricing we sought based on our cost base”.

“The business model quite clearly in this environment has to work from the appropriate selling price down, and we have to keep focusing and keep re-engineering until we find a business model with costs that allows us to sustain market share growth at the right price points,” he added.

Doyle said Tiger’s efforts to push through price increases in bread, rice and pasta was complicated by a new set of regulations introduced by the South African government in March to protect consumers, while also putting limits on item purchases for shoppers.

He explained the National Disaster pricing regulation allows a company to increase prices but only based on “cost-push inflation” experienced prior to the Covid-19 outbreak. In effect, Doyle says, the aim of the regulation is to “freeze profitability and margins at the level of the reference period” set out in March, which for Tiger was the three months ended in February.

He added: “As you inflate price, you can see there’s a switch-off in terms of volumes. Getting the cost base right to narrow that price premium in those categories [bread, rice and pasta] is important. And it’s particularly important in the short term because the other levers to pull are really about what you put into the market that is different and how you modify consumer perception of value on existing product ranges in terms of price points.

“In the next 12 months, the focus has to be on taking out cost because of that dynamic, which we don’t see changing dramatically, and to be honest is likely to intensify given the post-lockdown health of the consumer and higher levels of unemployment.”

Nigeria is another problematic area for Tiger due to a legal dispute with a former distributor that has blocked the company from exporting to that market for the first six months of the year. It sold its loss-making Deli Foods business in Nigeria in October last year, and elsewhere disposed of its stake in local seafood firm Oceana Group to private-equity investor Brimstone Investment Corp.

In 2018, it also sold its 51% holding in Haco Tiger Brands to Kenyan multi-millionaire Chris Kirubi.

“Based on the fact that an agreement in principle has been reached with the former distributor in Nigeria, a settlement amount of ZAR7m has been provided for in abnormal items,” Tiger said in the earnings statement.

The company expects to recommence exports to Nigeria in June.

Still, Tiger’s revenues from exports and the international segment declined 4% to ZAR1.6bn during the first half.

Nigeria also presents further challenges going forward, Doyle said, from the plunge in the oil price, the uncertainties from Covid-19 and a further possible devaluation in the country’s currency, the naira.

The African country, for which oil generates the majority of its revenues, devalued the naira by 15% in March.

But Tiger also struggled in its grocery, and snacks and treats divisions during the half, with Doyle describing the performance in the former as “pretty disappointing in terms of February and March”.

Snacks and treats “slowed significantly” in March, but the division was already facing challenges in January and February, particularly in the chocolate segment, the CEO said.

We “found ourselves out-priced, particularly in chocolate from discretionary spending”, Doyle added.

He was obviously displeased with the latest set of results, despite the CEO only being sat in the hot seat for the latter two months of the half, but Doyle seems optimistic about future prospects.

“I am confident that we are starting to create some momentum”

“It’s certainly not a pretty story that I’m telling you but I am confident that we have some very specific plans already in place and that we are starting to create some momentum to drive a better underlying performance as we go forward,” Doyle told analysts.

The CEO said the company is “deep in negotiations with interested parties” for the value-added meats business, while its review of options for Deciduous Fruit is in the early stages. Tiger is also seeking to sell-off the “tail-end” of its personal-care operations.

Earlier this month, Tiger said it had incurred an impairment charge of ZAR557m in the first half mainly related to its DaVita soft drinks and Deciduous Fruit operations but also from its investment in UAC Foods in Nigeria.

The earnings statement noted the Deciduous Fruit business was also a drag on its export performance as the Covid-19 lockdown measures “prevented access to certain export markets”, which forced Tiger to ship to “less profitable” destinations in the US and the UK.

Doyle went further on the call with analysts. “The Far East market has been significantly impacted by Covid-19 but also by a change in dynamics in terms of duties between the European Union and the US,” adding that the sector “was already traded in a category that globally is in decline”.

The VAMP business, which was first put on the market back in 2017 before Enterprise Foods was implicated in a 2018 listeriosis outbreak, is proving difficult given it’s a loss-making operation, amplified by the “quite challenging macro-economic environment”, Doyle said.

We are in “deep negotiations with interested parties and hopefully in the next few weeks, rather than months, we will reach a conclusion”, the CEO added. “We are not in a position yet where I can express that as a high probability. I’m quite confident that we won’t be operating in the VAMP business by the end of the year.”

Doyle said the “key deliverables” before the year-end include the rationalisation of the personal care business, the conclusion of the VAMP exit, a “concrete plan” for Deciduous Fruit, and the “structural realignment and resultant cost savings” execution.

Going forward, there seems to be a prime role for private label to play, too, given the pending recession, although those offerings generally tend to be lower-margin products. But it would add to Tiger’s revenue streams once its consolidation process is complete.

Doyle “expects a deep recession over the next 18 months and weaker rand won’t help”.

Business sentiment continues to improve, showing a clear recovery since the onset of COVID-19. Sentiment in 2021 was up by 8% compared to 2020.   Consumer industries had the highest sequential filings sentiment growth in Q3 2021. Optimism around digital themes and general outlook drove the positive trend in overall business sentiment.   GlobalData’s Filing Analytics Annual Report 2021 on the Consumer industries provides insights into sentiment and mention trends for companies, geographies, and themes. Get real-time analysis of:

Understand the overall outlook for Consumer and spot the topics and themes that will be most impactful in the next few years.   Download the full report to understand what to expect and how to align your business for success.   By GlobalData