In a shock announcement today (12 March), Wal-Mart revealed that Andy Bond is stepping down as chief executive of Asda. The news has raised many an eyebrow in the world of UK retail, as it comes hot on the heels of speculation that Asda is gearing up for a major acquisition and ahead of a highly-anticipated investor meeting. Bond’s departure – and the appointment of his successor – will prove telling not only for Asda but also for the landscape of the UK’s retail sector, Katy Humphries suggests.

After 16 years at Wal-Mart owned UK supermarket group Asda – the past five of which were spent occupying the chief executive’s office – Andy Bond has announced that he is going to scale back his role at the company.

Bond will stand down as chief executive and take on the part-time advisory role of chairman of Asda’s executive board. He will continue as interim Asda CEO with responsibility for the day-to-day operations of the group until a successor is appointed.

Bond has been credited with revitalising Asda and has overseen a period of sustained growth at the retailer. Wal-Mart insists that 2009 was Asda’s “best year ever”, capping 15 straight quarters of “market outperformance”.

Comment
What is food industry interest in hiring for roles linked to ‘the future of work’? – data 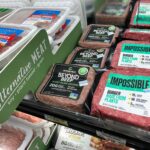 However, of late, the group has struggled to maintain its stellar growth rate. Asda put in a poor showing at Christmas – partially due to the extreme weather conditions that struck the UK. The chain’s sales growth has slowed, with revenue up 4.6% in the final quarter of 2009, down from 5.6% the previous quarter.

And, according to market research firm Kantar Worldpanel, it was the only one of the big four supermarkets to see its share of UK grocery sales fall in the 12 weeks to 21 March. The company’s market share dropped from 17.3% to 17.1% in the period, while larger rival Tesco saw its share grow from 30.1% to 30.3%, Kantar revealed at the end of March.

In comments at a suppliers’ convention, unexpectedly made public in a note written by a JP Morgan analyst, executives suggested that Asda had focused too much on its price positioning at the expense of its overall offer. The retailer’s top brass reportedly characterised the supermarket’s offering as “boring” and “tired”.

While Asda might be a business that has gone off the boil, it seems unlikely that the group’s recent troubles would be enough for Bond to have been ‘pushed’ by Wal-Mart’s performance-driven management – particularly given the strength of Asda’s performance under his leadership and the swift moves to address the challenges it now faces in the UK.

After all, it was only in February that Bond announced Asda was embarking on a “new chapter” to drive “future growth”. Bond said that the company would expand in non-food and speed its programme of small-store openings while looking to retain its focus on everyday low prices.

Bond was expected to provide details more details on this strategy at an investor meeting scheduled for this Thursday.

Some industry watchers have suggested that Bond’s departure may have resulted from frustration at the lack of freedom he may have experienced under Wal-Mart’s stewardship.

“The problem is, with a company like Wal-Mart, you are still under a degree of central control, it’s not really like running your own set-up because you still have that pressure from Wal-Mart from the top,” Verdict Research’s Neil Saunders observes. “They’ve got quite clear ways of doing things and someone like Bond, who is quite entrepreneurial, might want to move on.”

Another City analyst suggests Bond may have felt unable to bring about a step-change in Asda’s scale without making a major acquisition to boost the group’s share in the saturated UK market.

Reports surfaced this weekend that the group is preparing to launch a bid for Home Retail Group, which owns DIY retailer Homebase and catalogue shopping chain Argos. Asda, which has remained unsurprisingly tight-lipped on the rumours, has also been linked to a possible bid for fashion chain New Look.

Any such move would provide a boost to Asda’s plans to expand in non-food. And, with Wal-Mart’s financial might and buying clout backing Asda, the suggestion that the retailer could be preparing to step-up its presence in general merchandising is sure to have caught the attention of the likes of Tesco, as well as other rivals on the UK high street.

While the precise reasons for the timing and motivation for Bond’s departure remain unclear, attention is already turning to possible candidates for his successor.

Wal-Mart has indicated that it is considering both internal and external candidates. However, if the US retail giant does already have a clear strategy for the UK, it would seem likely that Wal-Mart will look to draw on its existing talent pool and appoint someone already closely aligned with its business.

Names linked to the top job include Andy Clarke, Asda’s chief operating officer, and Asda finance chief Judith McKenna. From the wider Wal-Mart organisation, industry observers have suggested that the likes of former Asda marketing chief and current international marketing officer Rick Bendel and former Asda executive and Wal-Mart Canada chief Dave Cheesewright could be in line for the post.

The appointment of Bond’s successor will be a telling indication of Wal-Mart’s UK strategy. And – backed by the powerhouse that is the world’s largest retailer – Asda’s future growth plans will have a profound impact on the future of the country’s retail sector.