In a country hit by recession and a BSE crisis, fastfood chains such as McDonald’s Japan are struggling to survive. But one fastfood chain appears to be going from strength to strength, despite challenging conditions. Michael Fitzpatrick reports on the phenomenon that is Freshness Burger.

For years Japan has excelled at importing foreign ideas and giving them a unique Japanese twist in order to improve the original and add value. Even that quintessential American product, the hamburger, has undergone transformation in the hands of the likes of the curiously named Moss Burger chain, where the bun is replaced by rice patties, and First Kitchen, where fries are dunked in wasabi powder. McDonald’s too has experimented with Teriyaki burgers that you’ll find nowhere else in the world. But in a saturated market there has been one fastfood outlet in Japan which really stands out and it’s called, aptly, Freshness Burger.

Brainchild of Mikio Kurihara, who is now president of the company, Freshness Burger was created just under a decade ago when Japan was skidding deep into its prolonged recession. Kurihara and his company turned fastfood business practices on their head and have now emerged triumphant from beneath the shadow of their ever-shrinking giant competitors such as McDonald’s and Burger King.

American as apple pie, but boasting that wonderful Japanese attention to service and detail, Kurihara’s homey feeling stores were set up away from the usual crowds and relied on creating healthier authentic burgers at prices that reflected better ingredients and slower preparation methods. His first store in Tokyo’s trendy Daikamyama was a quiet hit and more stores and a franchise business soon followed. Turnover now stands at ¥5.3bn and Freshness Burger currently employs 84 full time and 1000 part time staff.

Not even the BSE crisis in Japan, which pole axed the entire beef business and forced McDonald’s to close stores, could dent Kurihara’s young customers’ enthusiasm for the Freshness Burger style.

“Food wise, we’re very different from places like McDonald’s and Burger King. Our handmade burgers are made from the highest quality Australian beef, and fries are cooked to order, so you can’t really call it a fastfood joint,” says Kurihara.

Service is relaxed, there’s no noticeable uniform and the outlets are comfortingly decked out in wood and neutral colours. It’s a place you relax, says natural food aficionado and writer Jun Sato.

“What freshness offers basically is a tasty fastfood alternative. You get a quality burger in a fresh-baked bun, a generous slice of tomato and some secret “Freshness sauce” which is very moreish. It costs a little more but it’s certainly worth the extra,” Sato says.

Kurihara’s philosophy was to create a ‘third place’ for youngish, particularly female, customers to go. “That’s third after first for home and second for work,” he explains. It’s an idea that has caught on surprisingly well reflected by revenues, which shot up to US$30mlast year.

Compare this with McDonald’s troubled franchise in Japan which posted a net loss of ¥2.34bn for the business year through December, sinking into the red for the first time in nearly three decades under the heavy cost of store closures.

Openings for McDonald’s Japan were reduced to 50 from 117 last year, leading to the first-ever net decrease of outlets since the chain debuted in Tokyo’s Ginza district in July 1971. ‘Even without the BSE crisis and a numbing recession, McDonald’s and its ilk would still be losing out to newer competitors. The newcomers are doing a better job of catering to changing consumer tastes for more variety, and for more upscale, sometimes healthier, on-the-go sandwiches,’ says Sato.

‘The stunning success of Kurihara’s brainchild underscores both his entrepreneurial brilliance and the structural changes altering consumption patterns in Japan in fundamental ways. Kurihara perceived that a growing number of consumers were tiring of eating less-than-healthy, mass-produced food, served instantly but impersonally in sterile, mechanised environments. Instead he offered “slow” but convenient food made with fresh ingredients, individually served at wooden tables and chairs in warm and friendly surroundings that invite lingering rather than rushing.’

It’s a recipe that has attracted young fans in their thousands, some have even spawned web sites dedicated to the glories of the Freshness approach where the multinationals only attract brickbats. Perhaps it is Freshness Burger’s rather hip, newly discerning young clientele that has been the secret of its success. This change in attitudes has also brought success to other small retailers for the first time. In recession-hit Japan consumers are increasingly eschewing big ‘safe’ brands and are looking for value for money and novelty.

Despite increased competition from other sectors, such as convenience stores with super cheap, but not always tasty, quick meals, the fastfood sector continues to boom for the smaller trader.

For the multinationals times are much tougher. Clark puts this down to the wrong attitudes that are simply out of synch with consumers in Japan and increasingly abroad.

‘I was first attracted to Freshness Burger by its trademark eco-themed signage, which makes it stick out like a healthy green plant amid Tokyo’s concrete-grey urbanscape,’ he says.

‘It was a delight to discover that the restaurant served real, fresh-squeezed orange juice at prices close to those charged by rivals for carbonated sugar water. Plus, the hamburgers were delicious and the atmosphere downright comforting. I became a regular customer, and felt good about feeding my kids Freshness burgers and real orange juice. After discovering Freshness, I’ve come to believe that the biggest problem McDonald’s faces is not marketing, but less-than-healthy food offerings and its plastic, sterile atmosphere.’

Meanwhile, McDonald’s and its like are in danger of losing their customers elsewhere. McDonald’s of the US remains at the bottom of the fastfood heap in a customer-satisfaction survey released recently and has done so since the American Customer Satisfaction Index survey started nine years ago.

As for the future of Kurihara and his burger chain, he sees his role as none less than ‘remaking the eating-and-drinking industry.’ Building on the success of his burger enterprise the 52-year-old entrepreneur is now about to embrace a gamble on one of Japan’s many food fads. This time it is soft pretzels. His competitors must be wishing this could be one twist too many for the Japanese alchemists.

Consumers have radically re-thought their priorities in recent years: find out what new trends and needs are arising and how these can be addressed through selecting the right ingredients in product formulations. GlobalData’s report on Trending Ingredients in FMCG offers a deep dive into popular and emerging ingredients across FMCG categories. Gain insights into how positively or negatively consumers perceive these ingredients, appraise the latest product formulations incorporating these ingredients, and learn how to successfully leverage these credentials in NPD and marketing. This report covers: Take a look now to understand which ingredients are impressing consumers, and make them work for your brand.
By GlobalData 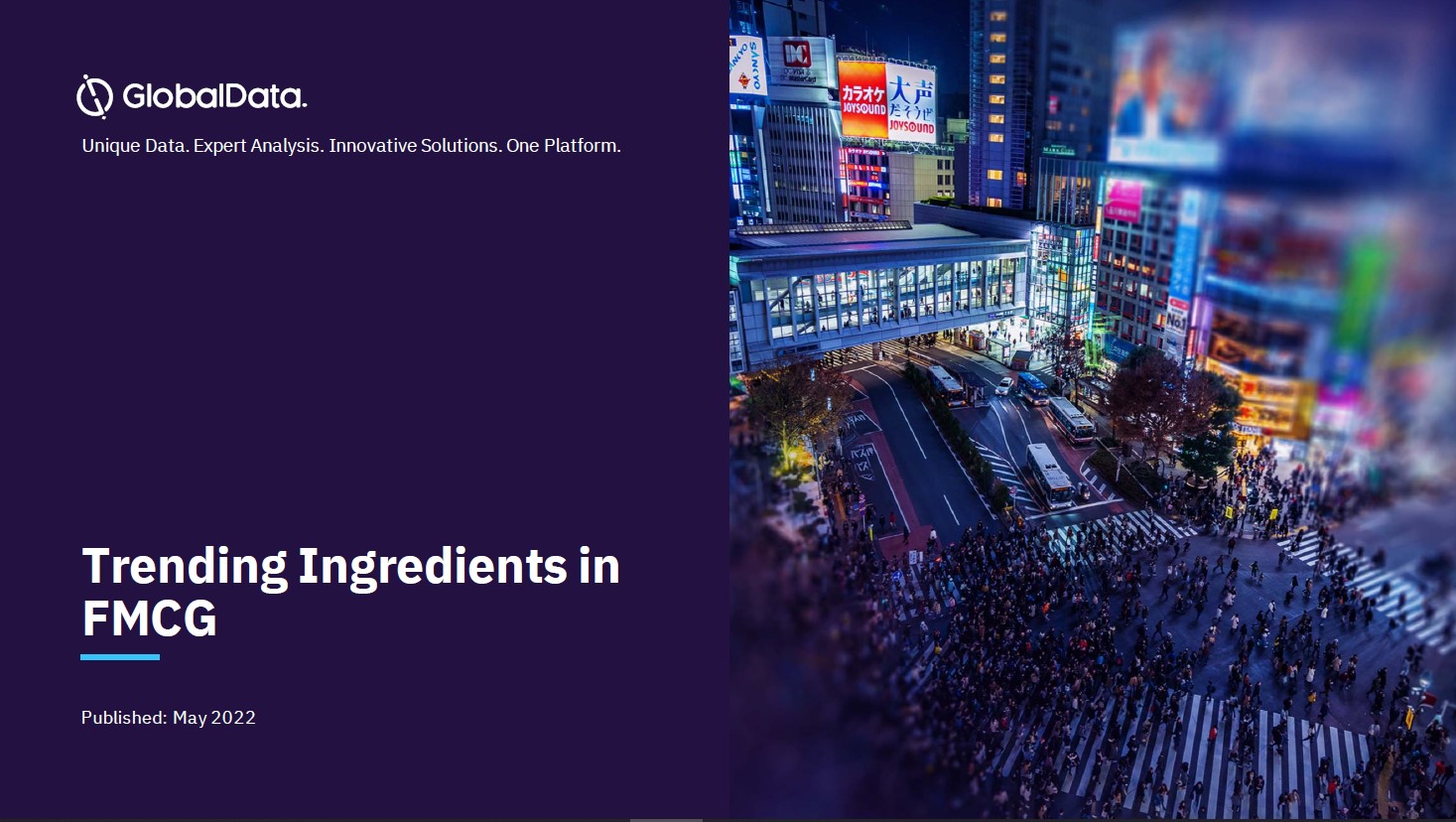 Consumers have radically re-thought their priorities in recent years: find out what new trends and needs are arising and how these can be addressed through selecting the right ingredients in product formulations. GlobalData’s report on Trending Ingredients in FMCG offers a deep dive into popular and emerging ingredients across FMCG categories. Gain insights into how positively or negatively consumers perceive these ingredients, appraise the latest product formulations incorporating these ingredients, and learn how to successfully leverage these credentials in NPD and marketing. This report covers: Take a look now to understand which ingredients are impressing consumers, and make them work for your brand.
By GlobalData