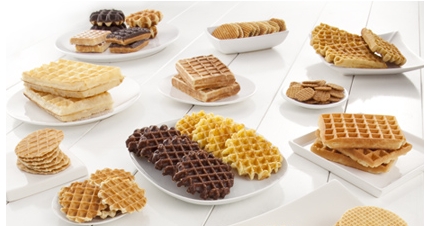 The Acemal Company has specialized in the construction of ovens for waffles and galettes since 1965. We provide installations for our customers worldwide, from the smallest to the largest industrial waffle manufacturer. Our qualified team and our flexibility allows us to offer tailor made solutions to all waffle makers.
The numerous technical innovations of recent years, as well as the introduction of new types of machines, have made it possible to design completely automatic lines. We build automatic lines for waffles, as well as semi-automatic installations, from the filling system, proofing chambers, waffle oven, automatic removing system, spiral conveyors and chocolate coating machines
The care and attention given to the carrying out of installations has, over many years, earned us the confidence of our customers.

Our tunnel ovens have a production capacity of up to 30,000 pieces per hour and an effective length of four to ten metres. The waffle moulds are in special cast iron and the ovens are equipped with colour touch screens, automatic temperature control systems and oiling systems.
The ovens are provided with a device for dividing firm dough into pieces and an automatic extractor for removing the biscuits or waffles after baking.

Semi-automatic waffle ovens for all types of waffle

The standard version of the semi-automatic waffle oven comes with 20, 24, 30 or 36 waffle irons and natural gas or propane heating. Production capacity is between 1,000 and 8,000 waffles per hour, according to size and baking time.
The interchangeable character of the waffle irons means that the semi-automatic waffle oven can produce all types of waffles. It is also possible to equip the ovens with an injection device and a drum to remove the waffles after baking.

The standard version of the entirely automatic waffle oven comes with 48, 60, 72, 80, 88 or 90 waffle irons and natural gas or propane heating. Production capacity is between 10,000 and 30,000 waffles per hour, according to size and baking time.
The automatic waffle ovens are provided with a dosing system for filling the waffle irons and a drum to remove the waffles after baking.
Accesories:

Acemal also produce entirely automatic lines for the baking of butter waffles. The line consists of the following elements:

Thank you for submitting the form. Your enquiry will be submitted to the company.